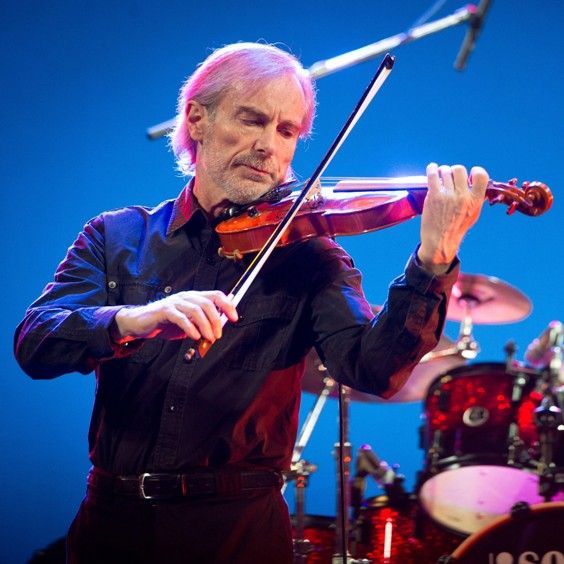 Ponty was born into a family of classical musicians on 29 September 1942 in Avranches, France. His father taught violin, his mother taught piano. At sixteen, he was admitted to the Conservatoire National Supérieur de Musique de Paris, graduating two years later with the institution’s highest honor, Premier Prix (first prize). In turn, he was immediately hired by one of the major symphony orchestras, Concerts Lamoureux, in which he played for three years.

While still a member of the orchestra in Paris, Ponty picked up a side gig playing clarinet (which his father had taught him) for a college jazz band that regularly performed at local parties. It proved a life-changing jumping-off point. A growing interest in the jazz sounds of Miles Davis and John Coltrane compelled him to take up the tenor saxophone. One night after an orchestra concert and still wearing his formal tuxedo, Ponty found himself at a local club with only his violin. Within four years, he was widely accepted as the leading figure in «jazz fiddle».

At that time, Ponty was leading a dual musical life: rehearsing and performing with the orchestra while also playing jazz until 3 a.m. at clubs throughout Paris. The demands of this schedule eventually brought him to a crossroads. «Naturally, I had to make a choice, so I took a chance with jazz,» he says. Critic Joachim Berendt wrote that «Since Ponty, the jazz violin has been a different instrument,» of his «style of phrasing that corresponds to early and middle John Coltrane» and his «brilliance and fire.»

Success with the violin

At first, the violin proved to be a handicap; few at the time viewed the instrument as having a legitimate place in the modern jazz vocabulary. With a powerful sound that eschewed vibrato, Ponty distinguished himself with be-bop-era phrasings and a punchy style influenced more by horn players than by anything previously tried on the violin; no one had yet heard anything quite like Ponty’s playing. Critics said then that he was the first jazz violinist to be as exciting as a saxophonist. Ponty’s notoriety grew by leaps and in 1964 at age 22 he released his debut solo album for Philips, Jazz Long Playing. Then a 1966 live album called Violin Summit united Ponty playing live in Basel, Switzerland on stage with such notable string players as Svend Asmussen, Stéphane Grappelli and Stuff Smith.

John Lewis of The Modern Jazz Quartet invited Ponty to perform at the Monterey Jazz Festival in 1967, which led to a U.S. recording contract with the World Pacific label and the albums Electric Connection with the Gerald Wilson Big Band and Jean-Luc Ponty Experience with the George Duke Trio. That year also brought Sunday Walk, the first collaboration between Niels-Henning Orsted Pedersen and Ponty. Through the late 60s and early 70s and throughout jazz-loving Europe, Ponty achieved mounting critical praise and ongoing popularity.

Frank Zappa and emigration to the United States

In 1969 Frank Zappa composed the music for Ponty’s solo album King Kong (World Pacific). In 1972 Elton John invited Ponty to contribute to his Honky Chateau album. Within a year – at the urging of Frank Zappa and The Mothers of Invention who wanted him to join their tour – Ponty emigrated with his wife and two young daughters to the United States and made his home in Los Angeles. He continued to work on a variety of projects – including two of John McLaughlin’s Mahavishnu Orchestra albums Apocalypse (1974) and Visions of the Emerald Beyond (1974) and tours until 1975, when he signed on as a solo artist with Atlantic Records.

For the next decade Ponty toured the world repeatedly and recorded 12 consecutive albums, all of which reached the Billboard jazz charts top five, selling millions of albums. His early Atlantic recordings, such as 1976’s Aurora and Imaginary Voyage, firmly established Ponty as one of the leading figures in America’s growing jazz-rock movement. He went on to crack the top 40 in 1977 with the Enigmatic Ocean album and again in 1978 with Cosmic Messenger. In 1984 a video featuring time-lapse images was produced by Louis Schwarzberg for the song «Individual Choice». Along with Herbie Hancock, Ponty also became one of the first jazz musicians to have a jazz (fusion) music video.

Besides recording and touring with his own group, Ponty also performed some of his compositions with the Pittsburgh New Music Ensemble, the Radio City Orchestra in New York, as well as with symphony orchestras in Montreal, Toronto, Oklahoma City and Tokyo. In the late 80s he recorded a pair of albums, The Gift of Time (1987) and Storytelling (1989) for Columbia.

On 1991’s Epic-released Tchokola, Ponty combined his acoustic and electric violins, for the first time, with the powerful polyrhythmic sounds of West Africa. He also performed for two months in the U.S. and Canada with a cast of African expatriates he had encountered on the Paris music scene. In 1993 Ponty returned to Atlantic with the album No Absolute Time. Working with American and African musicians, Ponty expanded on the explorations of Tchokola with a moving and soulful result. «There is a whole scene in Paris of top-notch African musicians,» he says. «I was very curious and wanted to educate myself in these rhythms, which were totally new to my ears.»

In 1995 Ponty joined guitarist Al Di Meola and bassist Stanley Clarke to record an acoustic album under the name The Rite of Strings. This all-star trio also undertook a six-month tour of North America, South America, and Europe that earned them intercontinental critical praise.

Ponty regrouped his American band in 1996 for live performances following the release of a double CD anthology of Ponty’s productions for Atlantic Records entitled Le Voyage: The Jean-Luc Ponty Anthology. One of these concerts was recorded in Detroit, Michigan, in front of 6,000 fans. It was released in February 1997 by Atlantic Records under the title Live at Chene Park.

In 1997 Ponty reassembled his group of Western and African musicians in order to continue pursuing the new style of fusion music that he had begun to explore in 1991. Together they toured for three years from the Hawaiian Islands to Poland and in North America as well as in Europe. Ponty also performed a highly acclaimed duet with bassist Miroslav Vitous in December 1999. In January 2000, he participated in Lalo Schifrin’s recording with a big band, Esperanto. In June 2001 Ponty performed duets with Vadim Repin, the young Russian star of classical violin, and at the Film Music Festival in Poland with American jazz violinist Regina Carter.

In August 2001 Ponty released his studio CD Life Enigma on his own label (J.L.P. Productions, Inc.), a return to his concept from the 70s with very modern production. Ponty played all the instruments on some tracks and was joined by his band members for performances on other tracks: William Lecomte (keyboards), Guy Nsangué Akwa (bass), Thierry Arpino (drums) and Moustapha Cissé (percussion). Ponty gave a successful concert with his band in his native town of Avranches (in the French province of Normandie) on 21 September 2001. He was also honored during a special ceremony at City Hall, gaining recognition from his compatriots. He then embarked on a successful concert tour in the USA in October–November 2001. In May 2001 Ponty recorded a concert with the same musicians at the opera house in Dresden, Germany. This recording was released in July 2002 on a CD entitled Live at Semper Opera (J.L.P. Productions, Inc. – Navarre Distribution in North America and Le Chant du Monde-Harmonia Mundi in Europe).

In January 2003 Ponty toured India for the first time, seven shows in six major cities for the Global Music Festival organized by Indian Violinist L. Subramaniam. Ponty brought along his bassist Guy Nsangué Akwa; both performed with Subramaniam’s band and drummer Billy Cobham who was also a guest star on that tour. Ponty also did an extensive tour across the US in the autumn.

In 2004 the PAL version of Ponty’s first DVD Jean-Luc Ponty in Concert was released in Germany (Pirate Records 202756-9), in France-Italy-Spain (Le Chant du Monde/Hamonia Mundi 974 1195). The NTSC version was also released in 2004 in North America (J.L.P. Productions, Inc./Navarre Distribution JLP 004). It contains a live concert with his band filmed in Warsaw in 1999, mixed in Dolby 5.1 surround-sound audio and released with bonus materials including an 11-minute film of travels and backstage scenes. In some countries, Jean-Luc Ponty in Concert is also available on CD.

Jean Luc Ponty & His Group toured in 2004 in France, Germany, Austria, Hungary, and Lithuania (and in Mumbai, India in their first concert as a complete ensemble). Ponty also performed on a reunion tour with Stanley Clarke and Al Di Meola as violinist in the Rite of Strings from June to October 2004 in the U.S. and Canada.

In 2005 Ponty toured with a new project called Trio! in collaboration with Stanley Clarke on double bass and Béla Fleck on banjo.

In 2006 Ponty reunited ‘Jean Luc Ponty & His Band’ and toured in the U.S., Chile, Venezuela, Western and Eastern Europe, Russia, The Middle East and India; they also recorded a new studio album called The Atacama Experience with guitarists Allan Holdsworth and Philip Catherine performing on a few tracks.

In April 2012 Ponty performed in an acoustic trio format with guitarist Bireli Lagrene and bassist Stanley Clarke for the second set of a concert at the Chatelet Theatre in Paris to celebrate five decades in music. The first set featured Ponty with a string orchestra behind him. The concert was very well received, and in 2014 Ponty recorded a great jazz album entitled D-Stringz with Bireli Lagrene and Stanley Clarke for Impulse/Universal Music France.

In September 2014 Ponty formed the Anderson Ponty Band with Jon Anderson, cofounder and lead singer of British progressive rock band Yes. Following the release of their CD and DVD Better Late Than Never they toured in the U.S. and Canada for a month and again in April–May 2016.

Ponty has been an avid user of 5-string electric violins (with a low C string) since 1978. He sometimes also uses a 6-string electric violin called the Violectra, with both the low C and low F strings (not to be confused with the violectra he played from the late 1960s to the mid-1980s that had the usual 4 strings but tuned an octave lower). Ponty was among the first to combine the violin with MIDI, distortion boxes, phase shifters, and wah-wah pedals. This resulted in his signature, almost synthesizer-like sound.

Work with Return to Forever

In 2011, Ponty was invited by bandleader/keyboardist Chick Corea to join the group Return to Forever for a series of concerts throughout the year. The group is labeled ‘Return to Forever IV’, as it is the fourth incarnation of the group. Ponty had first recorded with Corea on his 1976 solo album My Spanish Heart.

Ponty is married and has two daughters. One daughter, Clara Ponty, is a pianist and composer; Ponty has collaborated with Clara on several projects, including her third album, Mirror of Truth (2004).