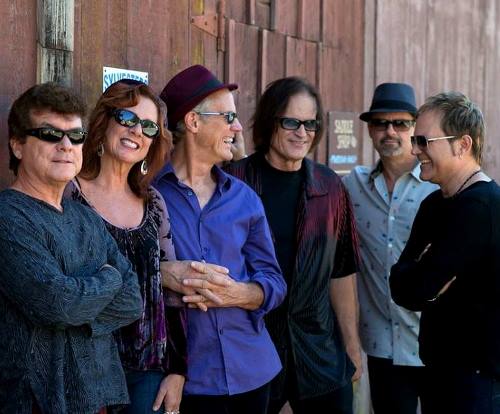 Ambrosia is an American rock band formed in southern California in 1970. Ambrosia had five Top 40 hit singles on Warner Bros. Records released between 1975 and 1980, including the Top 5 hits «How Much I Feel» and «Biggest Part of Me». Most of the original band members have been active with the group continuously for the past 25 years to the present day.

Ambrosia currently tours internationally and has worked in the past and present with Leonard Bernstein, Kurt Vonnegut Jr., Alan Parsons, Bruce Hornsby, and most recently Michael McDonald, among other notable artists. In 2015 the group released a new single and plans to release an album of all-new material in 2016.
Formation and inspiration

The group was founded as a quartet with guitarist/vocalist David Pack, bassist/vocalist Joe Puerta, keyboardist Christopher North, and drummer Burleigh Drummond. They chose the name Ambrosia in 1970 to represent a vision of their music: all shades, textures, colors and styles. While Ambrosia had several radio hits in the 1970s, much of the material on their five albums is progressive in nature.

The founding constituents of Ambrosia were reared in Southern California’s South Bay, later adopting San Pedro as their hometown. Their initial musical influences, like many of their generation, came from The Beach Boys and The Beatles. Ambrosia fused symphonic art rock with a slick produced pop sound, resulting in a «melodic prog» style.

Early on, the band was infatuated with Crosby, Stills, Nash & Young and began to experiment with vocal harmonies. After the group attended a show at the Whisky a Go-Go in December 1969 to see an unknown but highly recommended new band calledKing Crimson, their perception of music was changed.

The musicians, inspired by the music and artists of the progressive rock era, acquired a significant regional admiration. In 1971 a friend who was doing sound for the Hollywood Bowl invited them to play there on stage to test a new sound system that had been installed. Gordon Parry, the head engineer in charge at the Bowl, was so impressed with the group that he invited them back to attend performances by the Los Angeles Philharmonic. He introduced them to conductor Zubin Mehta, who featured Ambrosia as part of a so-called All-American Dream Concert.

Ambrosia auditioned for Herb Alpert and A&M Records early in their history, but were signed by Warner Brothers, who would release five albums by the group.

The first album, Ambrosia, produced by Freddie Piro, was released in February 1975. It spawned the Top 20 chart single «Holdin’ On To Yesterday» as well as the minor hit «Nice, Nice, Very Nice.» The latter sets to music the lyrics to a poem in Kurt Vonnegut’s Cat’s Cradle. The album was nominated for a Grammy award for Best Engineered Recording (other than Classical). Alan Parsons was the engineer for Ambrosia’s first album and the producer for their second. All four members of Ambrosia played on the first Alan Parsons Project album, Tales of Mystery and Imagination, which was recorded soon after Ambrosia’s first album. David Pack later appeared on the Alan Parsons album Try Anything Once (1993), co-writing, playing and providing vocals on three songs.

After lengthy touring, the band returned in September 1976 with Somewhere I’ve Never Travelled. The album yielded the title song and the single «Can’t Let A Woman», which both became FM favorites, both featuring lush orchestration and vocal arrangements. The record sleeve folded into a large pyramid. Somewhere I’ve Never Travelled received a Grammy nomination and set the stage for the band’s signing to Warner Bros. Records.

In 1976 the group recorded The Beatles song «Magical Mystery Tour» for the transitory musical documentary All This and World War II (November 1976). The film’s soundtrack consisted of different groups providing arrangements of Beatles songs. Their version of «Magical Mystery Tour» scored a Top 40 hit and has since been a staple of their live shows.

In August 1978 Life Beyond L.A. was released. It marked a move away from their lush arrangements and introduced a more raw, aggressive jazz/r&b influence. Christopher North, who had family obligations and was not totally happy with the group’s shift away from the sound of the first two albums, left the group in 1977 during the album’s recording. The year 1978 marked their biggest pop breakthrough with their first Gold single «How Much I Feel» from the album, which was a No. 3 hit on the Billboard Hot 100. Warner Bros advertised the title cut for radio and Life Beyond L.A. started to get significant airplay on radio stations a few months after the album’s release. Extensive touring with Fleetwood Mac, Heart, and the Doobie Brothers, in addition to major headlining shows, cemented Ambrosia’s reputation as a live act. For the ’78 touring band, North returned and the group added a second keyboardist, David C. Lewis, as well as an additional singer Royce Jones.

In April 1980 Warner Bros. released One Eighty, which produced two of the year’s biggest hits. The first, «Biggest Part of Me», reached number three for three weeks on theBillboard Hot 100 and crossed over to the soul chart, where it peaked at number thirty-five.[7] The second, another blue-eyed soul hit, «You’re the Only Woman (You & I)», reached No. 13 on the Billboard Hot 100. One Eighty earned the band three Grammy nominations, including Best Pop Vocal Group. A headlining world tour followed. For the Japanese leg of the tour, the group was joined by their longtime friend Cliff Woolley (formerly of The Association) on guitar, harmonica and backup vocals.

The title of the album One Eighty was believed by fans to signal the group’s «180-degree» change in direction. In actuality, it was so named because it was recorded in January 1980 (1/80). They dedicated one of their songs to Sandie Clark.

Also in 1980, the band contributed the song «Outside» to the movie Inside Moves and «Feels So Good to Win» appeared in the film Coast to Coast later that same year. The following year they placed another track, «Poor Rich Boy» (written by Burt Bacharach), on the soundtrack of the movie Arthur.

In 1982 David C. Lewis briefly left the touring group to be replaced by Bruce Hornsby, four years before his own rise to stardom. The same year, Ambrosia released their fifth and final studio album, Road Island (May 1982), their first effort without the assistance of Freddie Piro’s production company. Produced by James Guthrie, the album consisted of intense, driving hard rock (outside of the soft ballad «Feeling Alive Again» and the progressive rock closer «Endings»). Though it scored a minor hit with «How Can You Love Me», the album was a commercial disappointment. The band broke up afterwards, ending their run of chart success.

After Ambrosia, David Pack pursued a solo career and produced or worked with many top artists. Pack’s 1985 solo album, Anywhere You Go, included the song «Prove Me Wrong,» which also appeared on the soundtrack of the 1985 film White Nights. Joe Puerta became a founding member of Bruce Hornsby and the Range.

In 1995, the band expanded their annual touring schedule. Pack had a conflict and guitarist John DeFaria filled in for him. Bernie Chiaravalle likewise stepped in the summer of 1997 and Mike Keneally did the honors in 1998 and 2000 for the concerts Pack was unable to play. Brian Stiemke subbed for an ill Burleigh Drummond for a few shows in 1997.

In May 1997 Warner Bros. released Ambrosia’s greatest hits CD, Anthology, which contained tracks from all five albums plus three new tracks. In addition to Anthology, the entire Ambrosia catalog was remastered and released on CD.

The band launched a 30th anniversary tour in 2000. Early the following year, it was announced that Pack had permanently left the band and he was replaced by Doug Jackson, who had filled in for him for some shows the previous year. Pack’s final show with the band was on November 4, 2000 in Chandler, Arizona. Jackson was in place on guitar for their 2001 shows, except for one gig at Stone Mountain Park in Georgia on August 25, where Steve Farris (from Mr. Mister) subbed for him.

Tollak Ollestad left in late 2004 to concentrate on a solo career and relocate to the Netherlands where he has had success. David C. Lewis then returned, after having substituted for Tollak on some 1999 and 2003 gigs. But Tollak remained on call to sub for various band members and came back to play with Ambrosia’s spring 2009 tour in place of Lewis & Shem.

In 2010 Rick Cowling (formerly with Kenny Loggins) came in on vocals, guitar and keyboards, though Tollak still appeared with the band from time to time, most recently in 2010 when Doug Jackson was out playing guitar for Gary Wright and Tollak handled keys once again while Cowling moved over to lead guitar until Jackson’s return later in the year.

Ambrosia appeared on the May 2, 2011 episode of Late Night with Jimmy Fallon as part of the host’s «Yacht Rock 2k11» theme show, performing «Biggest Part of Me» (during the show) and «How Much I Feel» (after the formal taping, but put up on the Fallon website.)

Since 2012, Burleigh Drummond’s wife Mary Harris is a band member on keyboards and vocals. Harris is also a vocal arranger and songwriter, who has co-written new material for Ambrosia performed onstage. She has previously worked in varied capacities with Pink Floyd, XTC, Stanley Clarke and for many years with Jimmy Buffett.

Ken Stacey rejoined in 2014 after Rick Cowling departed. Ambrosia’s current six-person lineup has been stable since that time, and the group continues to tour, sometimes combining their talents with other artists including Michael McDonald, Edgar Winter, Dave Mason, Gary Wright, Al Stewart and others. Ambrosia’s live performances showcase both their legacy hit material and more recent songs. Ambrosia continues to feature a majority of the band’s founding members, with Puerta, Drummond and North onstage, as they have been for the past twenty five years.
Live and alumni albums

On September 1, 2001 the band recorded a live album at the Galaxy Theater in Santa Ana, California without David Pack. This album, Live, was released in May 2002. Also, in 2003 Collectables Records released another compilation album, How Much I Feel and Other Hits. Several compilation albums and another live album have been released, though none officially from the band. In 2004, the band released a DVD called Ambrosia: Real Artists Working. Ambrosia has written and performed new material, and an album of all new original material is currently being recorded, their first since 1982.